Samson And Delilah – A BAMtastic Night

Special thanks to everyone who made it out to BAM on Tuesday. Here’s a recap written by IndiePix President Bob Alexander. Enjoy!

THE BAM SCREENING OF SAMSON AND DELILAH Delilah TONIGHT

The screening of Samson and Delilah at the Brooklyn Academy of Music screening room was a great success. Last week, the film was part of the National Geographic Society’s “All Roads” festival. This Friday night, the film opens commercially in New York City at the Village East Cinema. But tonight, over 200 people across New York City attended this screening in Brooklyn and they and party goers attended the reception afterwards. It was a great event, and IndiePix was super-pleased with this launch of the film. I have two stories to tell across the jump!

After the screening of the film — which really left the crowd (me included) breathless — Warwick and Kath participated in a Q&A. Obviously, they have done these things before. But Kath, before she answered the first question said: “I want to acknowledge this audience which is the largest audience we have had for a Q&A. Usually half the people walk out!” At which point, the moderator said: “Brooklyn is special!”

And that’s really the case. The audience was totally engaged in the Q&A and the repartee was great. At the end of the Q&A in the wrap up remarks, Warwick said:

“I know this film has been really difficult to get into North America and there have been a lot of problems, but the people at IndiePix have been terrific and Kath and I applaud their courageous efforts to bring this film to you all.”

What a totally great thing for him to say and we — all of us from Indiepix — totally appreciate his comments.

But let me say this: What ever we do pales in comparison to the creative energy and courage that Warwick and Kath have demonstrated in not only making this film, but bringing it to the world — first in Australia, and then in Cannes, and now here. Their work is so completely impressive that we are humbled to have the opportunity to serve that work and bring it to the public.

Later in the evening, I had a note from a friend who attended the screening:

I loved the film makers statement afterwards about the process of making artwork as more important than the selling of it in the aboriginal tradition — the painting as a by-product of the process of creating it. How often in our society today we forget all about the journey, we are always so anxious for “the destination”!

Was also thinking that if everyone saw this film instead of the new Bruce Willis movie this weekend the world would be a totally different place on Monday! Congrats to Indiepix for making films like this available!

What on earth are we talking about? You’ll just have to see it — and you can see the film in theaters through the end of December. At that point it will be available in retail stores, for rent, on your cable VOD channel, and digitally to download or rent. Sometimes we have the opportunity to serve works of art and creativity that command your attention. This is one of those films, and I hope you have the opportunity to see it in one of these venues in the next few months. 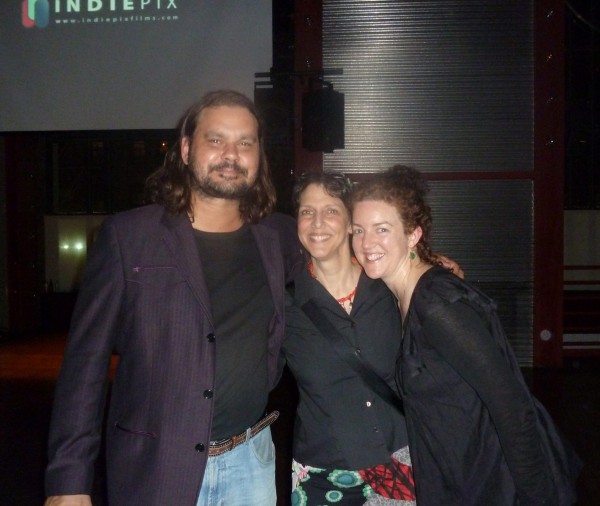